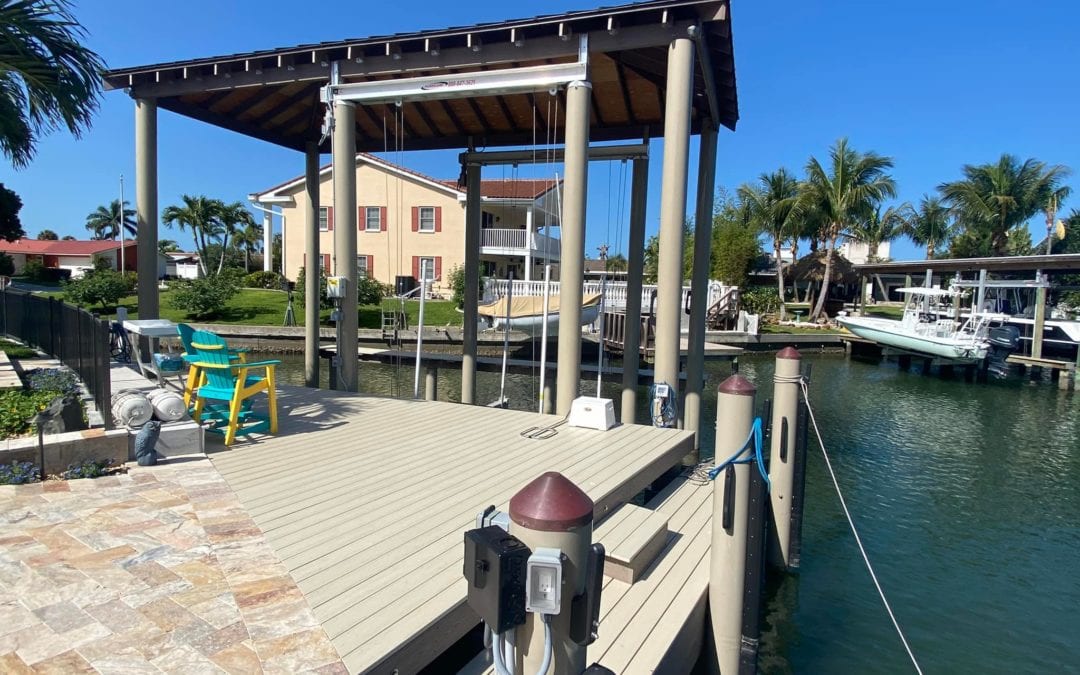 Did you know that Tampa Dock and Seawall is now actually located IN Clearwater?

That’s right! The majority of our customers are in this part of Pinellas County so we decided to move closer to where YOU are.

So, if you live in Clearwater and are looking for a Dock Builder or seawall contractor for the first time you should know ja few things about your choices:

Next: You’ll want to pay close attention to the permitting process. Making sure your Clearwater or Clearwater Beach dock design meets code is vitally important.

Not just because it will save you the potential hassles of code enforcement issues, but also because those codes make SURE your dock will stand up during storm season.

…and building for the future

Here’s what we’ve found after almost 20 years of building docks in Clearwater and surrounding areas:

> There are some basic dock designs that we start with, then adjust depending on what YOU want and what works best for your waterfront.
New docks can have many differences.

> The materials you choose make a big difference. Composite materials cost more than traditional, pressure treated wood, but in the long term they’re worth it. Compare prices on those.

> Build for the future! You many not have  PWCs (personal watercraft) now, but almost every dock we build now has mooring space for kayaks or paddle boards. And one day you may want a bigger boat!

Here are a few basic dock layouts to get you thinking: 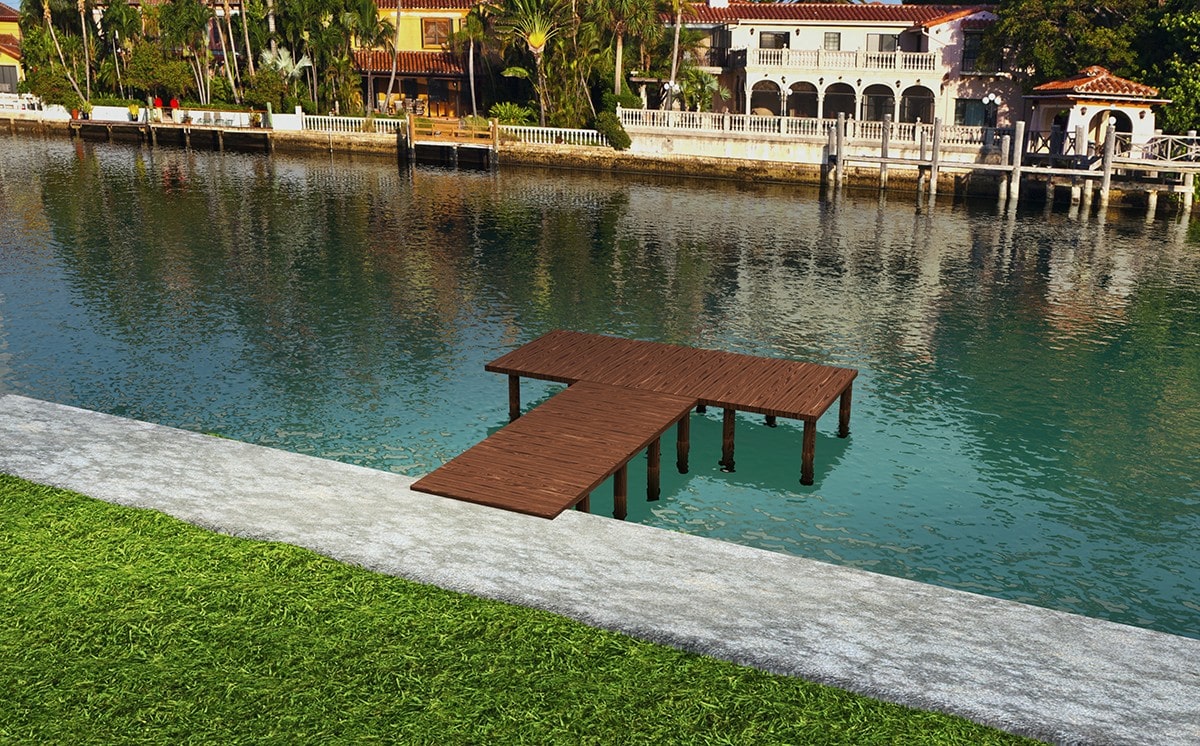 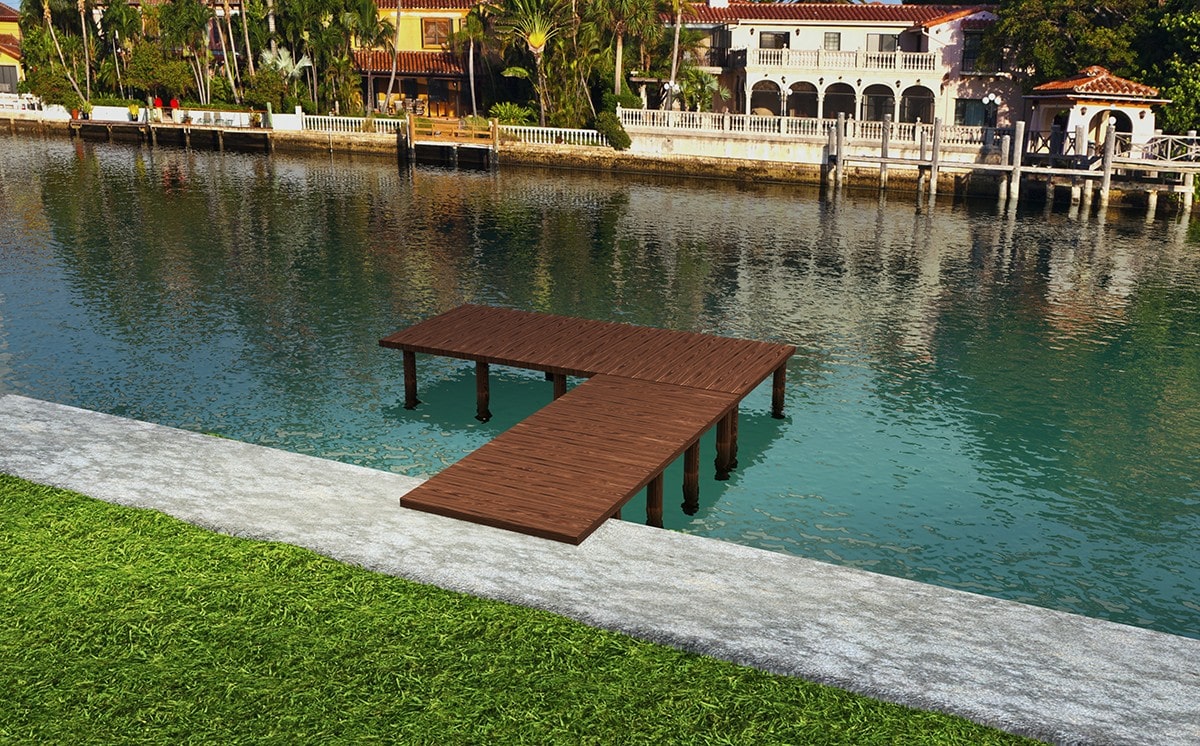 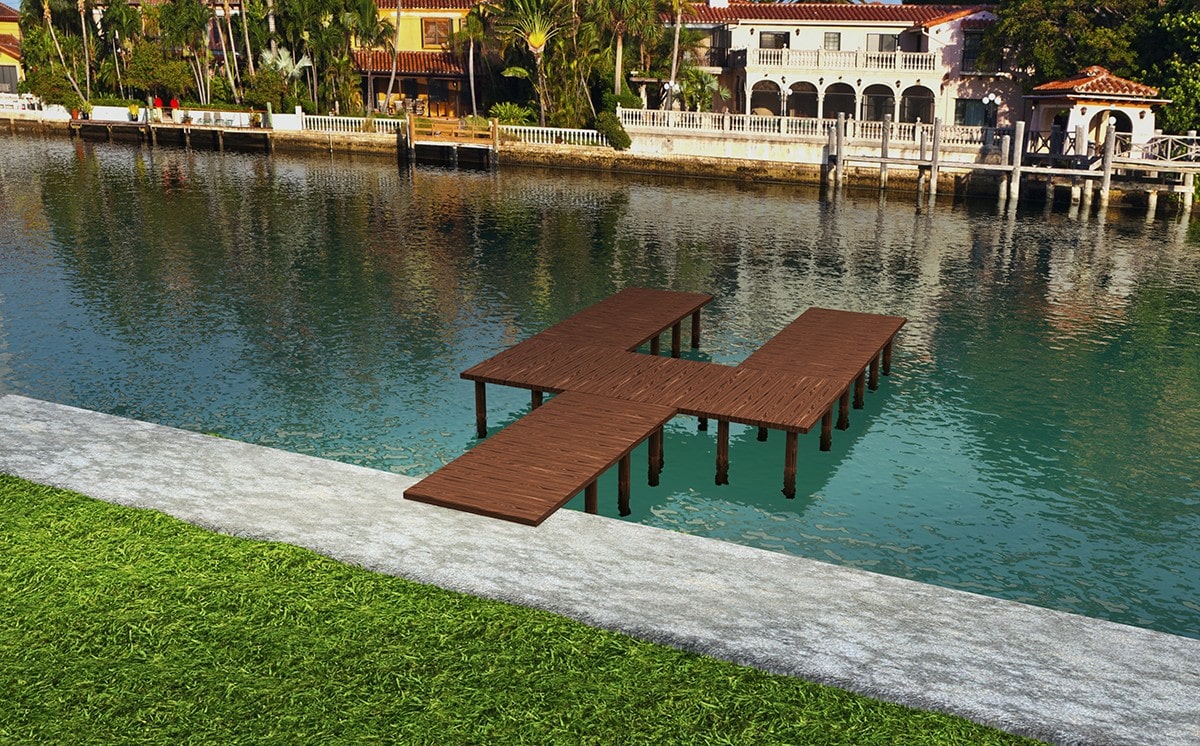 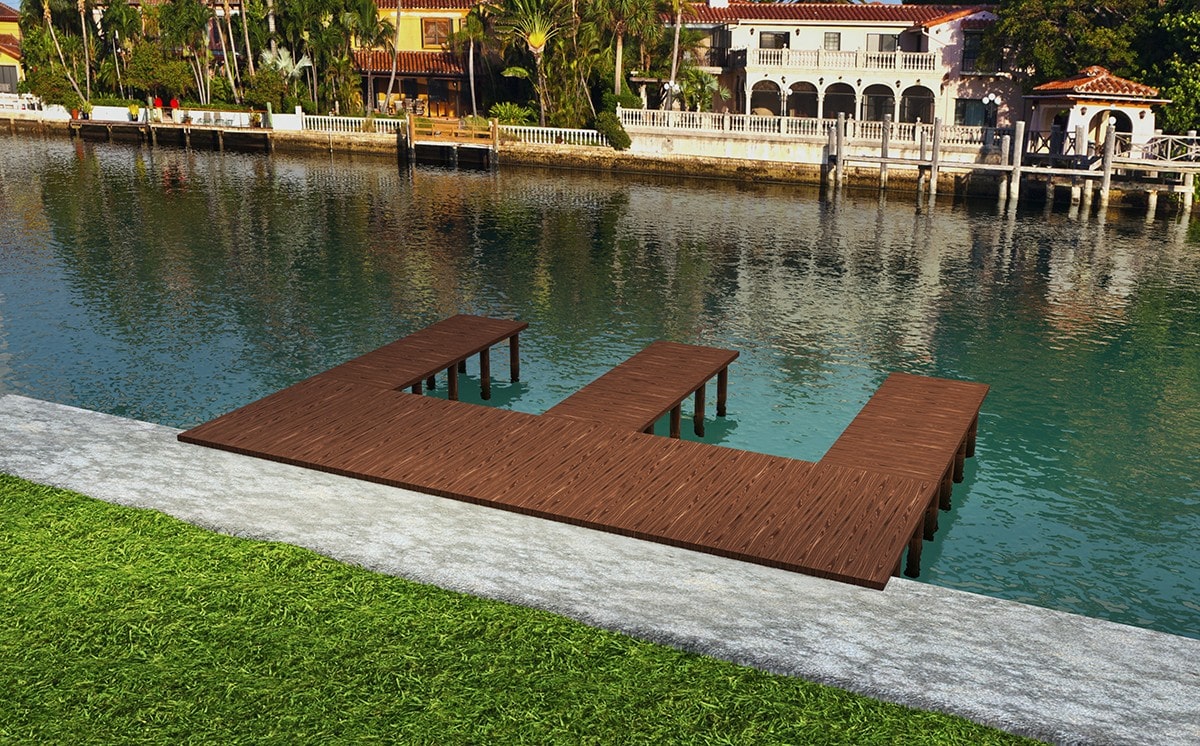 Sample Dock Builder Job “Near Me” if you live in Clearwater 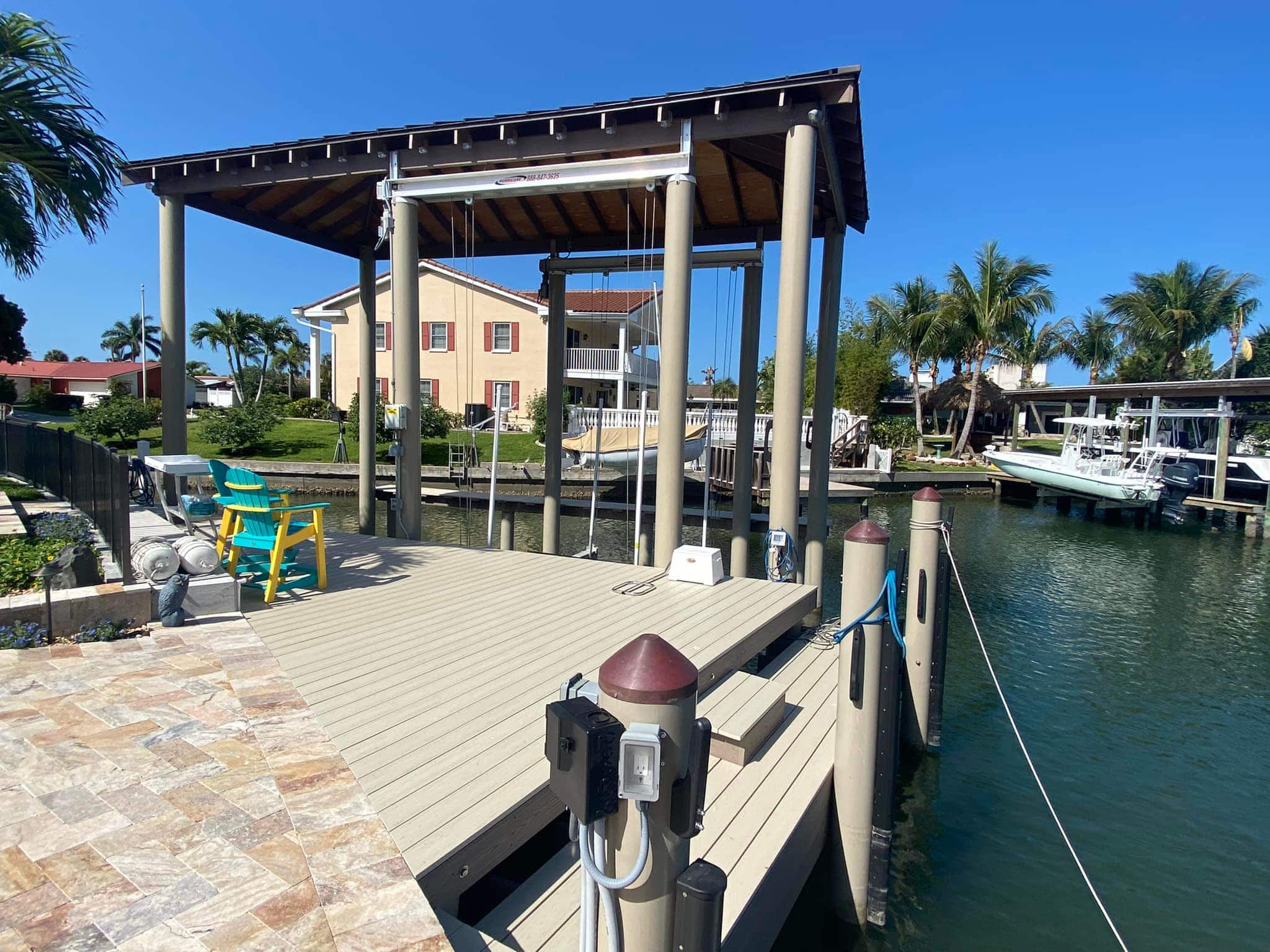 As you can see, this dock design presented a few interesting challenges.

See how the property curves aroudn that seawall?

If we were to have stuck with one of the linear designs you see in the illustrations above the dock would stick too far out into the canal.

So, we created a seemless connection with that beautiful stone tile decking. 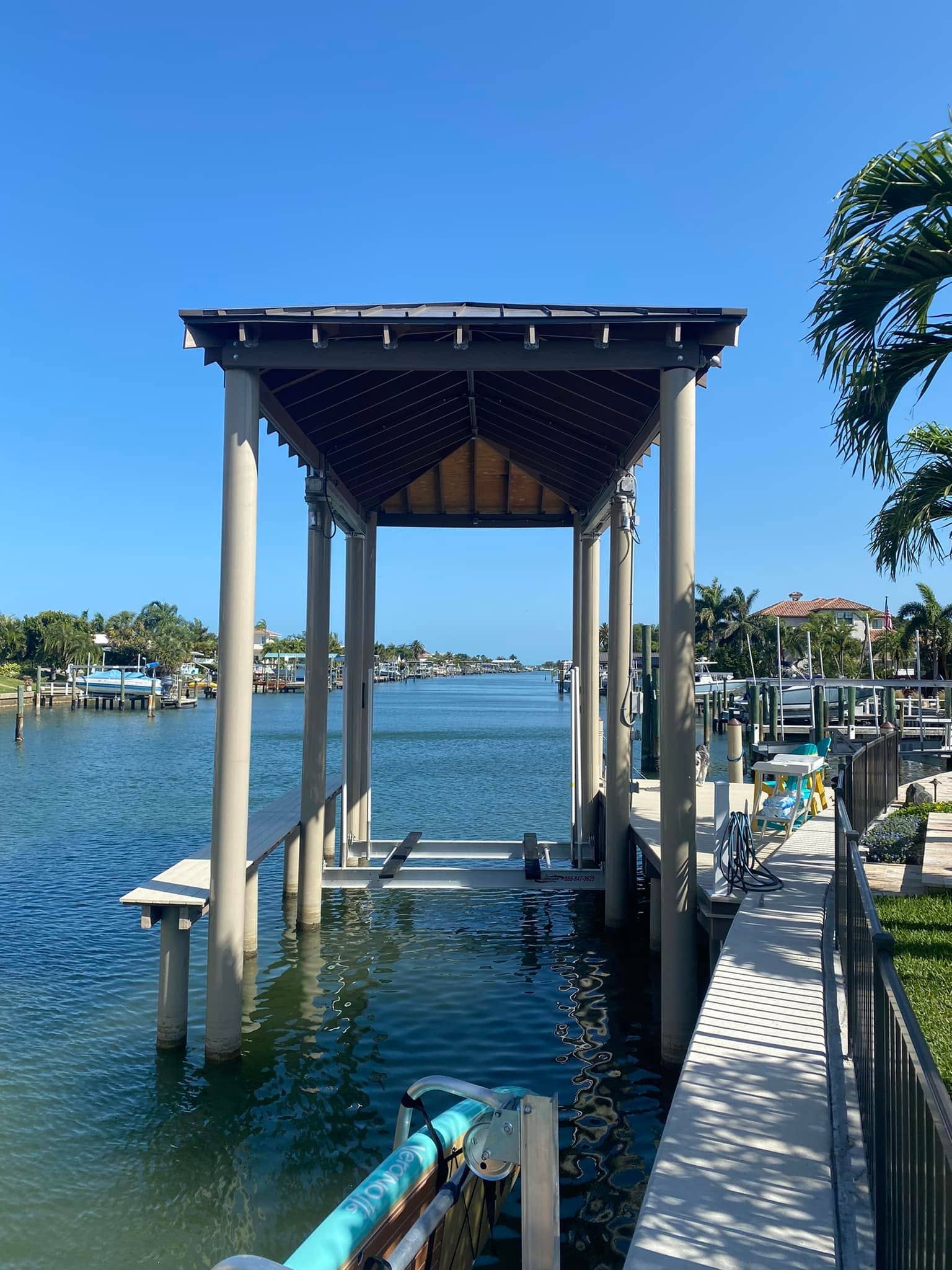 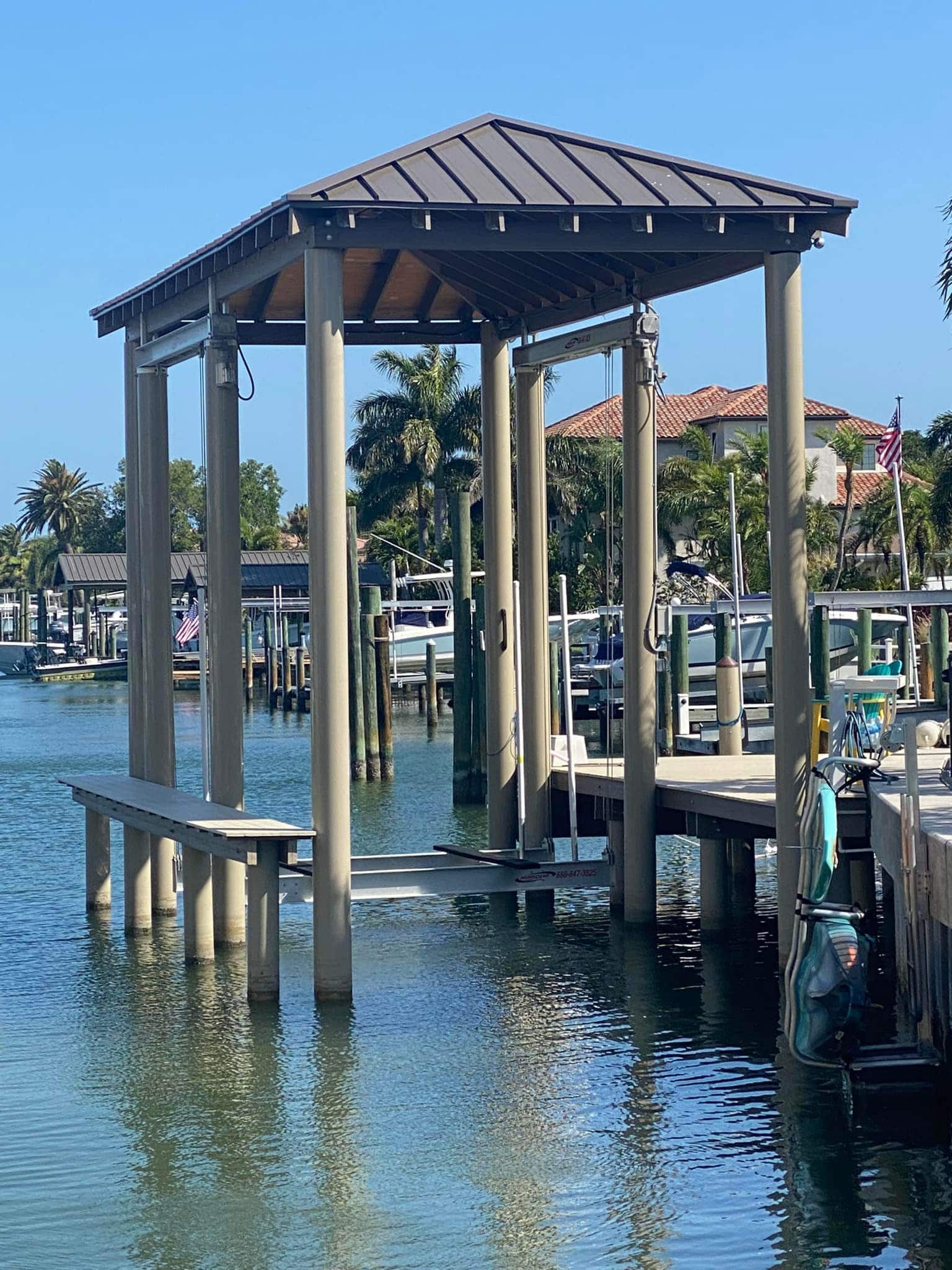 The images above show some great choices by this homeowner.

Those pilings you see aren’t traditional pressure treated wood. They are Eco Piles made up in Jacksonville, FL.

Eco Piles are a composite fiberglass and polymer substitute with some unique properties.

#1: They have a hollow interior with very specific star shaped support system. It makes them incredibly tough!

#2: They’re flexible to a certain extent. And that makes them perform remarkably well in HIGH WINDS.

#3: They are pest resistant. The waters around Clearwater are home to more shipworms than anywhere else on the planet (hyperbole). But they don’t eat Eco Piles! 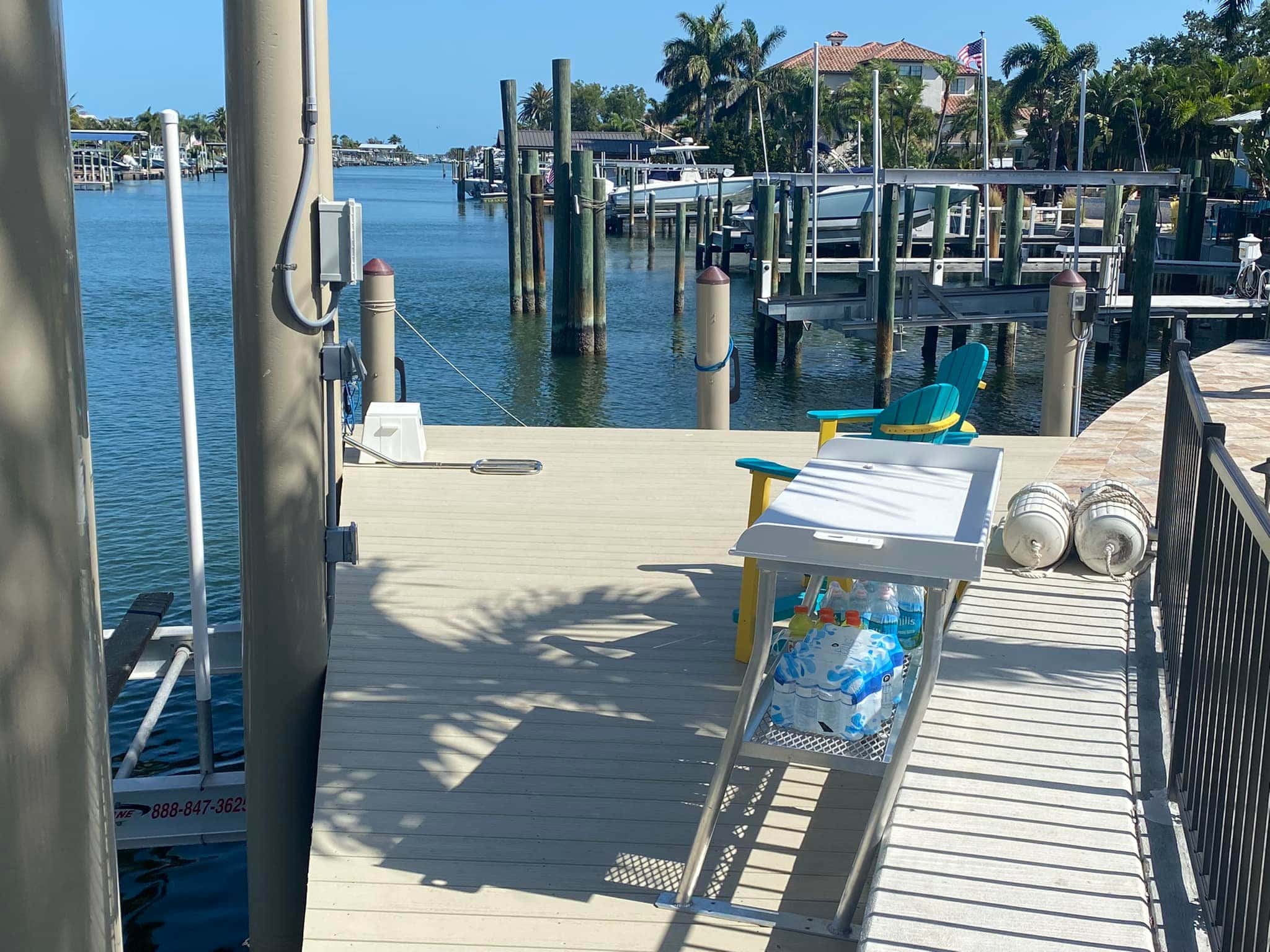 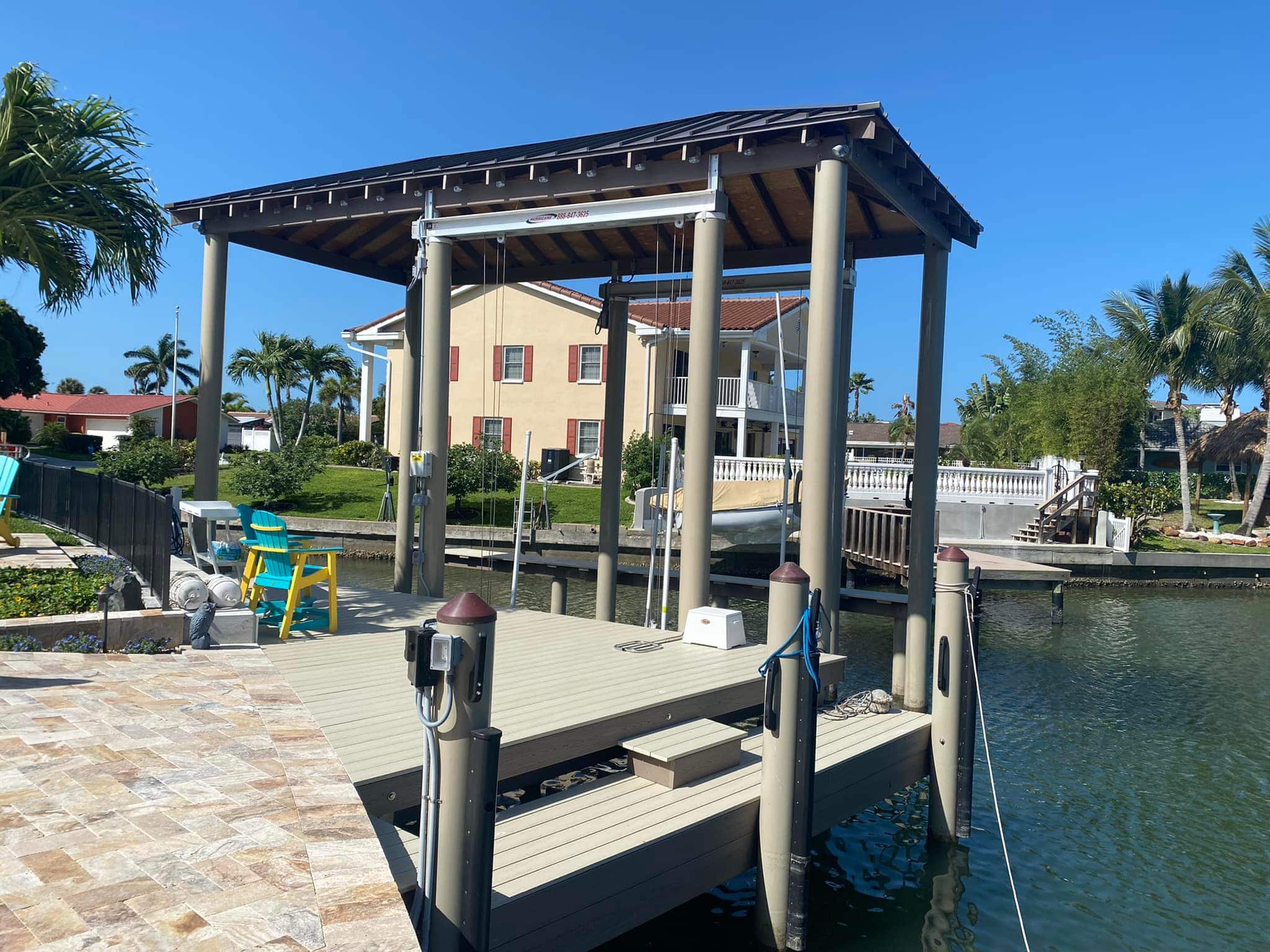 With a traditional wooden dock you simple have to reseal the decking on a regular basis.

So we recommended WearDeck composite decking.

That’s the way it will look TEN YEARS OR MORE from now.

You should just sweep occasionally!

Some good dock accessories here. Including that step down into the water – pefect for getting in there if you’d like, or a place where you can hop on the dock from a PWC.

Fish cleaning stations come in VERY handy! Leave the messy stuff on the easy to clean dock and just bring what you’re cooking up into the house or the grill.

Walkway on the OTHER side of the boat lift. Did notice that? There’s a place to stand on the canal side of the boat. That’s vital for cleaning and maintenance of the watercraft.

There are examples of our work all through the photos page here and on Facebook if you’d care to look. But the best thing  you can do to get started on your replacement dock is getting started with us!