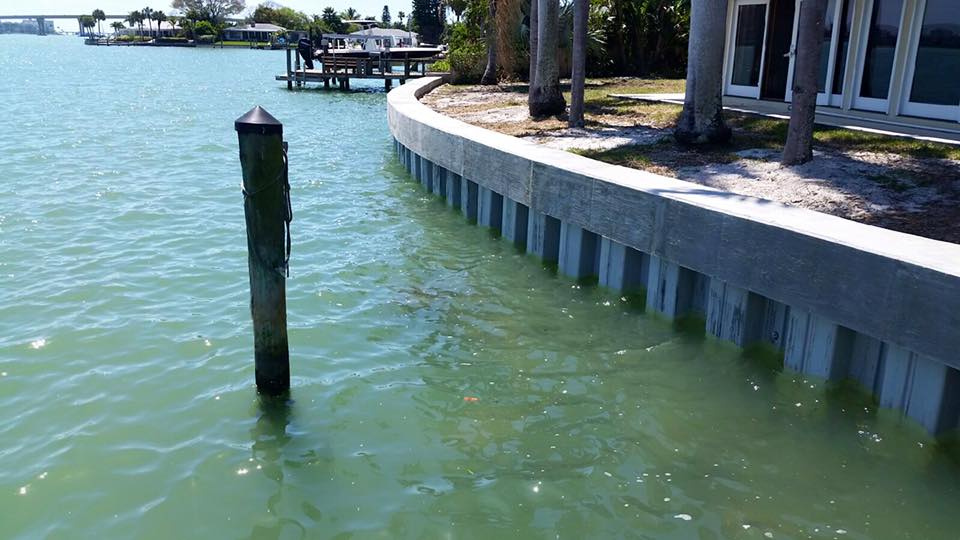 You can think about a concrete seawall as being built like a poured concrete wall for a house. Forms are built, concrete is poured in and in the end you get a solid wall between your property and the water.

Since erosion is a big factor in seawall health, anchors called “tie-backs” are buried far up into your property and attached to the upper part of the seawall. That prevents the seawall from tilting into the water from the top if the soil underneath erodes.

But concrete is subject to cracking and deterioration over time, and that’s the beginning of a failed seawall.

Just walk outside and take a look at your driveway. Once a crack appears, water intrusion and plants expand the crack and eventually the driveway needs replaced. Same thing for a concrete seawall. But not when you use vinyl seawall panels.

Why Use Corrugated Vinyl for Seawalls

The panels used to build a vinyl seawall are ingenious in 2 different ways:

First: Vinyl does not corrode or crack like concrete does. After all, PVC is a vinyl compound and it’s used in thousands of applications, including medical, specifically because it doesn’t corrode. You can learn more about the science behind vinyl here: https://www.vinylinfo.org/uses/

So no cracks or erosion over time.

Second: Corrugated vinyl seawall panels are installed with tongue and groove. That’s one of the tightest, strongest techniques to use to bond one panel to another. And that’s used to prevent water intrusion.

Let’s put it this way… if you’re driveway was made of corrugated vinyl panels instead of poured concrete, you probably wouldn’t need to worry about cracks!

Highlights of using a Vinyl Seawall

These corrugated seawall panels aren’t right for every seawall repair or installation. That’s why Tampa Dock and Seawall is so careful about what to recommend for your project.

Looking for Seawall Repair or Installation

As you’re looking for someone to install those panels or build a new seawall, realize that it’s a serious construction project well outside the capabilities of a craiglist handyman or unlicensed worker.

Tampa Dock and Seawall is a state licensed contractor that has built and repaired hundreds of seawalls in the area. You can see our BBB rating and license number right on the front page of the website. This is important because a licensed contractor will pull all the correct permits – which could save you thousands in fines and fees and will install a seawall that will last for years to come – which will save you from repeating your investment in repairs or replacements when substandard work fails.

Let the professional team at Tampa Dock and Seawall help you decide the right materials and techniques to build or repair your seawall – you’ll love the results!